The Ranger Raptor largely mirrors the Bronco Raptor in terms of its powertrain: it has the same twin-turbo 3.0-liter V-6 engine, making 392 horsepower and 430 pound-feet (those figures may change for the U.S. market). A 10-speed automatic transmission and four-wheel drive are standard, as is a two-speed transfer case and front and rear locking differentials.

While the Bronco Raptor shares its 3.1-inch diameter Fox Racing adaptive shocks with the F-150 Raptor, the Ranger gets 2.5-inch diameter Fox shocks. The same anti-lag feature from the Bronco is found here, which allows the turbos to remain spooled when you lift off the throttle for brief periods. Several driving modes will be available that will affect the tuning of the shocks, the loudness of the exhaust, and other factors.

As is de rigeur for any Raptor model, there's a large "FORD" script that dominates the front grille, and the body looks to be wider than the standard next-generation Ranger thanks to exaggerated fender flares. 33-inch BF Goodrich K02 all-terrain tires can be seen in the photos, along with 17-inch bead-lock-capable wheels that will be optional.

Inside, the interior is far more modern than the current Ranger's and features a large 12.0-inch vertically oriented touchscreen and a digital gauge cluster. The touchscreen runs Ford's Sync 4A software and a premium audio system will also be offered. We expect the Ranger Raptor to be offered only as a crew cab, as is the F-150 Raptor.

Look for more U.S.-specific information to come on the Ranger Raptor within the next few months, as it's slated to go on sale on our shores sometime in 2023. 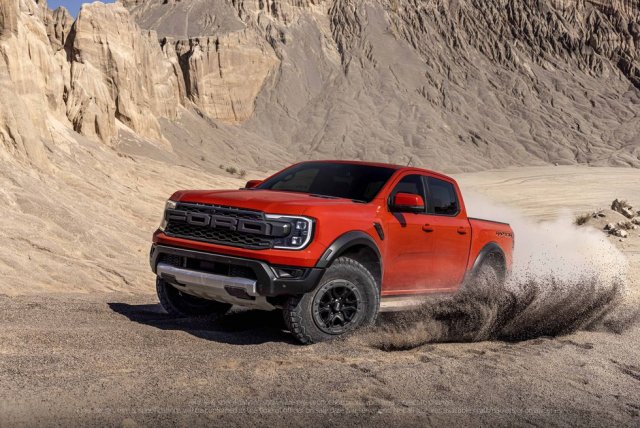